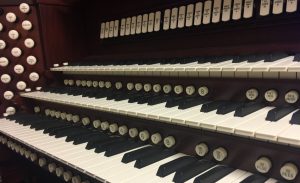 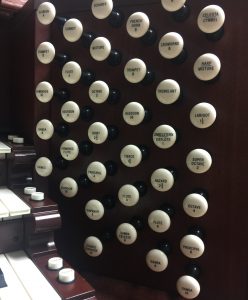 The Hutchinson Organ was built over the course of several years beginning in 2014 and concluding in 2018. The console shell was originally built in 1930 as Opus 1400 by the Casavant Organ Company of Canada and has served in multiple locations in both Canada and the United States in churches and private residences.

The interior of the organ was entirely removed and components were replaced. Electric repulsor drawknobs and coupler rail were engraved and built by Harris Precision Products. The manuals were built by Organ Supply Industries with both the Great and Choir/Accompaniment outfitted with “second touch” contacts. The console control system was built by Opus-Two ICS.

The sound processing is done through Hauptwerk software with a specially designed computer and 8.1 speaker system designed and built by Martin Digital Organs

Stops for the instrument were engraved with common organ nomenclature so as to make them not specific to any one instrument. The stoplist is as follows: